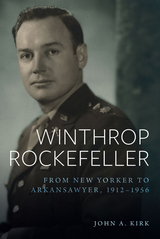 Why did Winthrop Rockefeller, scion of one of the most powerful families in American history, leave New York for an Arkansas mountaintop in the 1950s? In this richly detailed biography of the former Arkansas governor, John A. Kirk delves into the historical record to fully unravel that mystery for the first time. Kirk pursues clues threaded throughout Rockefeller’s life, tracing his family background, childhood, and education; his rise in the oil industry from roustabout to junior executive; his military service in the Pacific during World War II, including his involvement in the battles of Guam, Leyte, and Okinawa; his postwar work in race relations, health, education, and philanthropy; his marriage to and divorce from Barbara “Bobo” Sears; and the birth of his only child, future Arkansas lieutenant governor Win Paul Rockefeller. This careful examination of Winthrop Rockefeller’s first forty-four years casts a powerful new light on his relationship with his adopted state, where his legacy continues to be felt more than half a century after his governorship.
AUTHOR BIOGRAPHY
John A. Kirk is the George W. Donaghey Distinguished Professor of History at the University of Arkansas at Little Rock and the author or editor of ten books, including Beyond Little Rock: The Origins and Legacies of the Central High Crisis and Race and Ethnicity in Arkansas: New Perspectives.

REVIEWS
“John A. Kirk’s incisive new biography overturns the familiar view of Winthrop Rockefeller as an outsider who decamped from a world of incomparable privilege to an underdeveloped state where he forged an unlikely political legacy. Kirk demonstrates through dogged research and astute judgment that Rockefeller’s landmark service in Arkansas extended from his engagement in a broad range of undertakings from youth to adulthood. A readable and intriguing portrait of a figure whose prelude to power distinguished him from other southern leaders of the era.”
—Ben F. Johnson III, author of Arkansas in Modern America since 1930


“In this authoritative biography, Kirk delves into Rockefeller’s ‘prehistory,’ illuminating what forged the spirit of the man who left New York high society behind for the outskirts of Little Rock, and then changed Arkansas politics almost completely.”
—Barbara Shubinski, Rockefeller Archive Center, Sleepy Hollow, New York


“Winthrop Rockefeller’s lineage presented him with high expectations and responsibilities. While Winthrop’s path was unconventional, his unwavering resolve made a lasting difference in the world around him. In this definitive biography, John A. Kirk stitches together a treasure trove of family letters and other significant documents to depict Winthrop’s important place in history.”
—Marta M. Loyd, Winthrop Rockefeller Institute, Morrilton, Arkansas

TABLE OF CONTENTS
Contents
Acknowledgments
1. Winrock
2. Growing Up Rockefeller
3. The Loomis Institute
4. Yale University
5. An Education in Oil
6. Entering the Family Business
7. Mobilizing for War
8. Hawaii and the Battle of Guam
9. The Battles of Leyte and Okinawa
10. From Soldier to Civilian
11. Husband and Father
12. Separation, Divorce, and Arkansas
Notes
Bibliography
Index
REQUEST ACCESSIBLE FILE