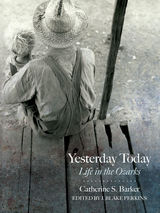 The emergence into pop culture of quaint and simple Ozarks Mountaineers—through the writings of Vance Randolph, Wayman Hogue, Charles Morrow Wilson, and others—was a comfort and fascination to many Americans in the early twentieth century. Disillusioned with the modernity they felt had contributed to the Great Depression, middle-class Americans admired the Ozarkers’ apparently simple way of life, which they saw as an alternative to an increasingly urban and industrial America.

Catherine S. Barker's 1941 book Yesterday Today: Life in the Ozarks sought to illuminate another side of these “remnants of eighteenth-century life and culture”: poverty and despair. Drawing on her encounters and experiences as a federal social worker in the backwoods of the Ozarks in the 1930s, Barker described the mountaineers as “lovable and pathetic and needy and self-satisfied and valiant,” declaring that the virtuous and independent people of the hills deserved a better way and a more abundant life. Barker was also convinced that there were just as many contemptible facets of life in the Ozarks that needed to be replaced as there were virtues that needed to be preserved.

This reprinting of Yesterday Today—edited and introduced by historian J. Blake Perkins—situates this account among the Great Depression-era chronicles of the Ozarks.
AUTHOR BIOGRAPHY
Catherine S. Barker (1901–1961), a native of the Midwest, lived in Batesville, Arkansas, for eleven years before relocating to Salt Lake City, Utah. She was an employee of the Federal Emergency Relief Administration in the Ozarks in 1933 and 1934.

J. Blake Perkins, an Ozarks native, is assistant professor and chair of history and political science at Williams Baptist University in Walnut Ridge, Arkansas. He is the author of Hillbilly Hellraisers: Federal Power and Populist Defiance in the Ozarks.

REVIEWS
“When Depression-era social worker Catherine S. Barker’s Yesterday Today was first published in 1941, she described her federal relief clients in the rural Arkansas Ozarks as ‘people well worth knowing.’ In this new edition, editor J. Blake Perkins provides an explanation of the life and times of Barker, shedding light on her filtered perceptions of 1930s Ozarkers struggling to make ends meet. Perkins shows us that Barker, too, was a person ‘well worth knowing’ and that Yesterday Today is a book well worth reading.”
—Susan Young, Shiloh Museum of Ozark History


“Unlike Vance Randolph and other contemporaries whose work is marked by rural romanticism, Barker offers an unvarnished account of life in the Ozarks through its unflinching depiction of rural poverty. Although her book has largely been overlooked in the years since her death in 1961, Barker’s account offers a rare glimpse of a pivotal time in the Ozarks for those who wish to better understand one of the most misunderstood regions in America.”
—Missouri Historical Review, Vol. 114, No. 4, July 2020