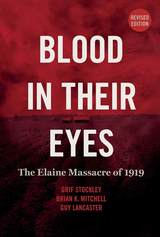 On September 30, 1919, local law enforcement in rural Phillips County, Arkansas, attacked black sharecroppers at a meeting of the Progressive Farmers and Household Union of America. The next day, hundreds of white men from the Delta, along with US Army troops, converged on the area “with blood in their eyes.” What happened next was one of the deadliest incidents of racial violence in the history of the United States, leaving a legacy of trauma and silence that has persisted for more than a century. In the wake of the massacre, the NAACP and Little Rock lawyer Scipio Jones spearheaded legal action that revolutionized due process in America.

The first edition of Grif Stockley’s Blood in Their Eyes, published in 2001, brought renewed attention to the Elaine Massacre and sparked valuable new studies on racial violence and exploitation in Arkansas and beyond. With contributions from fellow historians Brian K. Mitchell and Guy Lancaster, this revised edition draws from recently uncovered source material and explores in greater detail the actions of the mob, the lives of those who survived the massacre, and the regime of fear and terror that prevailed under Jim Crow.
AUTHOR BIOGRAPHY
Grif Stockley is an award-winning novelist and historian whose many books include Daisy Bates: Civil Rights Crusader from Arkansas and Black Boys Burning: The 1959 Fire at the Arkansas Negro Boys Industrial School.

Brian K. Mitchell is assistant professor of history at the University of Arkansas at Little Rock. He has researched and published on the Elaine Massacre, the 1859 expulsion of free blacks from Arkansas, and urban renewal in Little Rock.

Guy Lancaster has written or edited three previous works on racial violence in Arkansas, including Bullets and Fire: Lynching and Authority in Arkansas, 1840–1950. He serves as editor of the Encyclopedia of Arkansas, a project of the Central Arkansas Library System.

REVIEWS
“This expanded edition of Blood in Their Eyes: The Elaine Massacre of 1919 is a valuable resource for coming to grips with one of the most significant episodes of racial violence in Arkansas and US history. Building on Grif Stockley’s pathbreaking first edition, Stockley, Mitchell, and Lancaster offer further analysis that incorporates newly uncovered sources, subsequent historical scholarship, and other recent developments in the efforts to excavate what occurred in Phillips County, Arkansas, in 1919. Their thoughtful, essential scholarship draws from a deep and probing knowledge of Arkansas and southern history. Their book is one of the best local studies of American racial violence that I have read.”
—Michael J. Pfeifer, author of Rough Justice: Lynching and American Society, 1874--1947


“The original edition of Blood in Their Eyes, published in 2001, has been the definitive study of the Elaine Massacre. Grif Stockley conducted painstaking, thorough research into the massacre and its aftermath, including interviews with persons whose ancestors were involved in those events. He did a remarkable job of providing narrative and analysis of a tragic, ugly episode that local whites tried hard to sweep under the rug. This updated edition, intended to more or less coincide with the centennial of the Elaine Massacre, draws upon some new sources that have been published (or, in some cases, discovered) since 2001 and also incorporates fresh research done by coauthors Brian K. Mitchell and Guy Lancaster, who did not contribute to the original edition. The updated edition largely sticks to the narrative of the original while providing significant new information, such as a greater investigation into the role of the U.S. military in the Elaine Massacre and the roles that some whites played in getting the ‘Elaine Twelve’ released from death row and in protecting Robert Hill, who fled to Kansas, from being extradited back to Arkansas. … Opening the eyes of some Arkansans and other Americans to the too often overlooked history of racial atrocities in the state and nation might seem more important now than it has in a long time.”
—Matthew Hild, Arkansas Historical Quarterly, Spring 2021