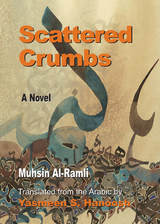 Set in an Iraqi village during the Iran-Iraq war, Scattered Crumbs critiques a totalitarian dictatorship through the stories of an impoverished peasant family. A father, a fierce supporter of Saddam Hussein—here called only “The Leader”—clashes with his artist son, who loves his homeland but finds himself literally unable to paint the Leader's portrait for his father's wall. The narrator remembers the disintegration of his family as he leaves the village to search for his cousin, even as he realizes that the only thing he really knows of this cousin is his absence. Translator Hanoosh says that the novel “evokes the processes of deterioration undergone both by the country and by the individual characters caught up in the maelstrom.” Scattered Crumbs was first published in Arabic in Cairo in 2000. This translation captures the subtle sarcasm of the original text and its elliptical rhythms.
AUTHOR BIOGRAPHY
Iraqi novelist Muhsin al-Ramli lives in Madrid, Spain, where he is the editor of Alwah, a journal of modern Arabic literature and thought. He is also the author of The Happy Nights of Bombing, Papers: Far Away from Tangier—Short Stories, and Searching for a Vivacious Heart: A Collection of Plays. Read about him (in Spanish) at Poesía y vida en Irak. Yasmeen Hanoosh is an Iraqi-born doctoral student in Arabic language and literature at the University of Michigan. She is the winner of the 2003 Arabic Translation Award.
TABLE OF CONTENTS
Acknowledgments
Scattered Crumbs
Off-Hand
1
2
3
4
5
6
7
8
9
10
Empty Handed
REQUEST ACCESSIBLE FILE