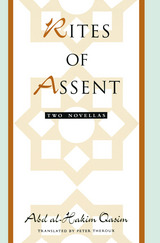 "Written in 1977 and 1981, the novellas translated in this volume form a compelling unity and testify to the creativeness and vitality of contemporary Arab fiction."

Abd al-Hakim Qasim (1935-1990), one of modern Egypt's great novelists, began writing short stories while imprisoned for his leftwing politics under the Nasser regime in the 1960s. This period in Qasim's life, along with his subsequent exile in Germany and his opposition to the Camp David Agreement, led him to avoid political commentary in his writing. He focused on people and events in the Egyptian village and the down-to-earth Sufi Islam practiced there. Still, the history of his political beliefs ensured his work would remain controversial, and most was published abroad in Beirut or Baghdad.

The power and inventiveness of modern Egyptian writing are manifest in this first English-language translation of two novellas that Qasim published together during his lifetime. Al-Mahdi is the story of Awadallah, an impoverished Coptic umbrella maker forced to convert to Islam by members of the local Muslim brotherhood. Awadallah's conversion, both unwilling and insincere, torments him with guilt, and he soon falls gravely ill. At the same time, subplots explore the philandering mayor's attempt to seduce his maid, and an affectionate homoerotic relationship between two young men in the Brotherhood. Elegantly narrated and visually evocative, Al-Mahdi illuminates everyday religious tensions in a small Egyptian town.

Where Al-Mahdi ends with Awadallah's death, Good News from the Afterlife opens virtually at the mouth of the grave--a testament to Qasim's versatility and compositional sense. This fantastical story brilliantly interweaves a young village boy's thoughts and the spiritual, sensual, and sometimes macabre recollections of a dead man newly lowered into his burial place. Memories and experiences mingle with images of the afterlife, as the deceased is judged by the Muslim angels of death and the boy suddenly hears that his grandfather has died. In the end, the boy awakes atop a grave, throwing into question which, if not all, of the story's strange events had been dreamed.

"[T]here's more than Mahfouz in modern Egyptian fiction, and it's good to have Qasim's work among us."