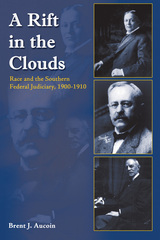 A Rift in the Clouds chronicles the efforts of three white southern federal judges to protect the civil rights of African Americans at the beginning of the twentieth century, when few in the American legal community were willing to do so. Jacob Treiber of Arkansas, Emory Speer of Georgia, and Thomas Goode Jones of Alabama challenged the Supreme Court's reading of the Reconstruction amendments that were passed in an attempt to make disfranchised and exploited African Americans equal citizens of the United States. These unpopular white southerners, two of whom who had served in the Confederate Army and had themselves helped to bring Reconstruction to an end in their states, asserted that the amendments not only established black equality, but authorized the government to protect blacks. Although their rulings won few immediate gains for blacks and were overturned by the Supreme Court, their legal arguments would be resurrected, and meet with greater success, over half a century later during the civil rights movement.
AUTHOR BIOGRAPHY
Brent J. Aucoin is an associate professor of history at Southeastern College at Wake Forest.
TABLE OF CONTENTS