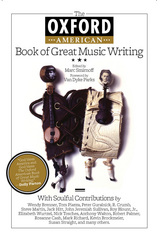 Not only have a breathtaking array of musical giants come from the South—think Elvis Presley, Robert Johnson, Louis Armstrong, Jimmie Rodgers, to name just obvious examples—but so have a breathtaking array of American music genres. From blues to rock & roll to jazz to country to bluegrass—and areas in between—it all started in the American South. Since its debut in 1996, The Oxford American's more-or-less annual Southern Music Issue has become legendary for its passionate and wide-ranging approach to music and for working with some of America's greatest writers. These writers—from Peter Guralnick to Nick Tosches to Susan Straight to William Gay—probe the lives and legacies of Southern musicians you may or may not yet be familiar with, but whom you'll love being introduced, or reintroduced, to. In one creative, fresh way or another, these writers also uncover the essence of music—and why music has such power over us.
To celebrate ten years of Southern music issues, most of which are sold-out or very hard to find, the fifty-five essays collected in this dynamic, wide-ranging, and vast anthology appeal to both music fans and fans of great writing.
TABLE OF CONTENTS