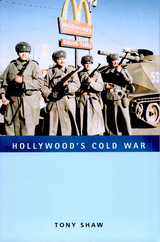 Hollywood's Cold War
by Tony Shaw
University of Massachusetts Press, 2007
Paper: 978-1-55849-612-5
At a moment when American film reflects a deepening preoccupation with the Bush administration's War on Terror, this authoritative and timely book offers the first comprehensive account of Hollywood's propaganda role during the defining ideological conflict of the twentieth century: the Cold War. In an analysis of films dating from America's first Red Scare in the wake of the 1917 Bolshevik Revolution to the collapse of the Berlin Wall in 1989, Tony Shaw examines the complex relationship between filmmakers, censors, politicians, and government propagandists. Movies, Shaw demonstrates, were at the center of the Cold War's battle for hearts and minds. Hollywood's comedies, love stories, musicals, thrillers, documentaries, and science fiction shockers played a critical dual role: on the one hand teaching millions of Americans why communism represented the greatest threat their country had ever faced, and on the other selling America's liberal-capitalist ideas around the globe. Drawing on declassified government documents, studio archives, and filmmakers' private papers, Shaw reveals the different ways in which cinematic propaganda was produced, disseminated, and received by audiences during the Cold War. In the process, he addresses subjects as diverse as women's fashions, McCarthyism, drug smuggling, Christianity, and American cultural diplomacy in India. Anyone seeking to understand wartime propaganda today will find striking contemporary resonance in his conclusions about Hollywood's versatility and power.
AUTHOR BIOGRAPHY
Tony Shaw is reader in international history at the University of Hertfordshire.
TABLE OF CONTENTS