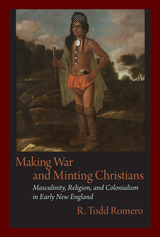 In this book, R. Todd Romero traces the interaction of notions of gender, the practice of religion, and the conduct of warfare in colonial America. He shows how Native and Anglo-American ideas of manhood developed in counterpoint, in the context of Christian evangelization, colonial expansion, and recurrent armed conflict.

For the English, the cultivation of manliness became an important aspect of missionary efforts. Conversion demanded that the English "make men" of the Indians before they could "make them Christians," a process that involved reshaping Native masculinity according to English patriarchal ideals that the colonists themselves rarely matched. For their part, Native Americans held on to older ways of understanding the divine and defining gender even as they entered English "praying towns" and negotiated the steep demands of the missionaries.

Evolving ideas of masculinity resonated with religious significance and shaped the meaning of warfare for Natives and colonists alike. Just as the English believed that their territorial expansion was divinely sanctioned, Indians attributed a string of victories in King Philip's War to "the Great God" and the perception that their enemies "were like women." Trusting that war and manliness were necessarily linked, both groups engaged in ritual preparations for battle, believed deeply in the efficacy of the supernatural to affect the outcome of combat, and comprehended the meaning of war in distinctly religious ways.
AUTHOR BIOGRAPHY
R. Todd Romero is assistant professor of history at the University of Houston.