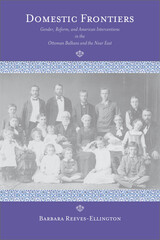 During the nineteenth and early twentieth centuries, American Protestant missionaries attempted to export their religious beliefs and cultural ideals to the Ottoman Empire. Seeking to attract Orthodox Christians and even Muslims to their faith, they promoted the paradigm of the "Christian home" as the foundation of national progress. Yet the missionaries' efforts not only failed to win many converts but also produced some unexpected results.

Drawing on a broad range of sources—Ottoman, Bulgarian, Russian, French, and English—Barbara Reeves-Ellington tracks the transnational history of this little-known episode of American cultural expansion. She shows how issues of gender and race influenced the missionaries' efforts as well as the complex responses of Ottoman subjects to American intrusions into their everyday lives. Women missionaries—married and single—employed the language of Christian domesticity and female moral authority to challenge the male-dominated hierarchy of missionary society and to forge bonds of feminist internationalism. At the same time, Orthodox Christians adapted the missionaries' ideology to their own purposes in developing a new strain of nationalism that undermined Ottoman efforts to stem growing sectarianism within their empire. By the beginning of the twentieth century, as some missionaries began to promote international understanding rather than Protestantism, they also paved the way for future expansion of American political and commercial interests.
AUTHOR BIOGRAPHY
Barbara Reeves-Ellington is associate professor of history at Siena College.