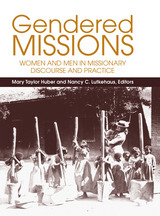 Gendered Missions: Women and Men in Missionary Discourse and Practice
edited by Mary Taylor Huber and Nancy C. Lutkehaus
University of Michigan Press, 1999
Cloth: 978-0-472-10987-6
Throughout the age of Western colonial expansion, Christian missionaries were important participants in the encounter between the West and peoples throughout the rest of the world. Mission schools, health services, and other cultural technologies helped secure Western colonialism, and in some cases transformed or even undermined colonialism's effect. The very breadth of missionaries's focus, however, made the involvement of women in missionary work both possible and necessary.
Missionary groups thus faced more immediately the destabilizing challenges that colonial experience posed to their own ways of organizing relations between women and men. Examining the changing prospects for professional women in the missions, the contributors to Gendered Missions ask how these shaped, and were shaped by, crucial practical, political, and religious developments at home and abroad. While the focus is on the tumultuous period that historian Eric Hobsbawm calls "The Age of Empire" (1875-1914), attention also is paid to how gender has been debated in later colonial and post-colonial missions.
Scholars from any field concerned with colonial and postcolonial societies or with gender and women's history should find this book of special interest. In addition, Gendered Missions should appeal to readers in church history, mission studies, and the sociology of religion.
Mary Taylor Huber is Senior Scholar, The Carnegie Foundation for the Advancement of Teaching. Nancy C. Lutkehaus is Associate Professor of Anthropology, University of Southern California.
REVIEWS
"The distinctive contributions of these articles is twofold: they take the testimony of women seriously and present it carefully; and they examine the consequences for women of a patriarchal system in the missionary structures in a dispassionate way. It is a serious study by scholars who are attempting to recover the often untold story of the contribution of women and of the difficulties they encountered in a service dominated by men. . . . Mission historians will meet new material in this book carefully and creatively presented and therefore it will be of great value to them."
—Lawrence Niemer, S.V.D., Missionary Institute London, Catholic Historical Review, April 2000
— Lawrence Niemer, S.V.D., Missionary Institute London, Catholic Historical Review