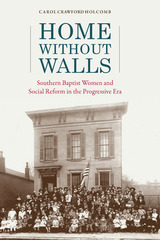 The Woman’s Missionary Union (WMU), founded in 1888, carved out a uniquely feminine space within the Southern Baptist Convention during the tumultuous years of the Progressive Era when American theologians were formulating the social gospel. These women represented the Southern Baptist elite and as such had the time to read, write, and discuss ideas with other Southern progressives. They rubbed shoulders with more progressive Methodist and Presbyterian women in clubs and ecumenical missionary meetings. Baptist women studied the missionary publications of these other denominations and adopted ideas for a Southern Baptist audience.

Home without Walls: Southern Baptist Women and Social Reform in the Progressive Era shows how the social attitudes of women were shaped at the time. By studying primary documents—including personal letters, official exchanges and memoranda, magazine publications, newsletters, and editorials—Carol Crawford Holcomb uncovers ample evidence that WMU leaders, aware of the social gospel and sympathetic to social reform, appropriated the tools of social work and social service to carry out their missionary work.

Southern Baptist women united to build a financial empire that would sustain the Southern Baptists through the Great Depression and beyond. Their social attitudes represented a kaleidoscope of contrasting opinions. By no stretch of the imagination could WMU leaders be characterized as liberal social gospel advocates. However, it would also be wrong to depict them as uniformly hostile to progressivism or ignorant of contemporary theological ideas. In the end, they were practical feminists in their determination to provide a platform for women’s views and a space for women to do meaningful work.
AUTHOR BIOGRAPHY
Carol Crawford Holcomb is professor of church history and Baptist studies at the University of Mary Hardin-Baylor and director of the UMHB Center for Baptist Studies.

Chapter 1. They Feared God More Than Men: The Birth of the WMU

Chapter 2. The Reconstruction of True Womanhood: WMU and Gender

Chapter 6. “A Gospel for All of Life”: Teaching and Proclaiming the Social Gospel