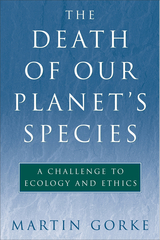 The present rate and extent of species extinction -- estimated by some scientists as one species every 20 minutes -- are unprecedented in the history of mankind. Human activities are responsible for nearly all species loss, yet ethical aspects of this crisis are rarely mentioned. Any concern expressed tends to be over potentially valuable resources -- information for scientists, or compounds that could be used in new medicines -- that are lost when a species disappears.

In The Death of Our Planet's Species, Martin Gorke argues that such a utilitarian perspective is not only shortsighted but morally bankrupt. Holding doctoral degrees in both ecology and philosophy, Gorke is uniquely qualified to examine the extinction crisis from both scientific and philosophical perspectives. He offers a wide-ranging review of the literature on the subject, drawing together those two lines of reasoning that are almost always pursued separately.

After critical examination of the current state of relevant ecological knowledge, Gorke presents a carefully considered case for attributing intrinsic value to all of nature, including all species. At the heart of his argument is an analysis of the concept of morality. According to this analysis, the universal character of morality does not permit us to establish limits of moral considerability. More precisely, every act of exclusion from the moral community is an arbitrary act and is not compatible with a moral point of view.

The Death of Our Planet's Species sets forth a sound and original argument about the philosophical and ethical dimensions of species conservation. Throughout, the author combines a high level of theoretical sophistication with clear and straightforward writing. Orignially published in German, this Island Press edition makes The Death of Our Planet's Species available for the first time to English-speaking experts and lay readers.

Martin Gorke is Assistant Professor in the Department of Environmental Ethics at the University of Greifswald.

REVIEWS
"...worthwhile reading for all those fed up with the usual politics in debates over forest management."
— Environment