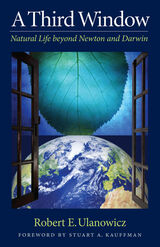 Thus far, the dominant paradigms through which modern scientists have viewed nature have been structured primarily around Newtonian and Darwinian approaches. As theoretical ecologist Robert E. Ulanowicz observes in his new work, A Third Window, neither of these models is sufficient for explaining how real change—in the form of creative advance or emergence—takes place in nature.
The metaphysical foundations laid by these great thinkers centuries ago are ill suited to sustain today's search for a comprehensive description of complex living systems. Ecosystem dynamics, for example, violate each and every one of the Newtonian presuppositions. Hence, Ulanowicz offers his titular "third window"—a new way of understanding evolution and other natural processes beyond the common mechanistic or materialistic philosophies of nature. Drawing on the writings of Walter Elsasser, Karl Popper, Gregory Bateson, Robert Rosen, and Alfred North Whitehead, as well as his own experience as a theoretical ecologist, Ulanowicz offers a new set of axioms for how nature behaves. Chance and disarray in natural processes are shown to be necessary conditions for real change. Randomness is shown to contribute richness and autonomy to the natural world.
The metaphysical implications of these new axioms will lend A Third Window a wide appeal not only among scientists, but also among philosophers, theologians, and general readers who follow the science and religion dialogue. Ulanowicz's fresh perspective adds a new voice to the discussion.
AUTHOR BIOGRAPHY

Robert E. Ulanowicz was appointed professor emeritus after thirty-eight years with the University of Maryland Center for Environmental Science at the Chesapeake Biological Laboratory in Solomons, Maryland. He is author of Growth and Development: Ecosystems Phenomenology and Ecology, the Ascendant Perspective. Ulanowicz was awarded the 2007 Ilya Prigogine Medal from the Wessex Institute and the University of Siena for outstanding research in the field of ecological systems.