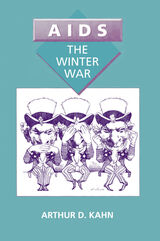 AIDS, The Winter War
by Arthur Kahn
Temple University Press, 1993
Cloth: 978-1-56639-018-7
"The most complete history of how AIDS treatment activism began--and an appalling look at the government AIDS mismanagement."

Arthur Kahn traces the history of the struggle for recognition of and action on behalf of the AIDS epidemic. He describes the heroic struggle for survival by persons with AIDS and their allies for survival. He documents the sophisticated and effective mobilization of AIDS activists in the face of apathy from the Reagan and Bush administrations.

Kahn presents a case study of the difficulties involved in bringing new drugs for AIDS to U.S. markets. He outlines the frustrating attempts to promote egg lecithin as the potential medicine for HIV patients after its use showed some signs of success in Israel. Obstruction by the federal bureaucracy, greed and incompetence on the part of the drug industry, stonewalling by scientific mandarins, and impediments to evaluation testing--these are shown to be the cruel realities faces by patients and activists.

After setting this background, Kahn details the work of President Reagan's commission on AIDS. Although news of the establishment of this committee was met with scorn and cynicism, the results of its study were both effective and humane. Led by Admiral James Watkins, whose sensitivity won the respect of both commissions members and gay activists, the Commission on the Human Immunodeficiency Virus (HIV) Epidemic issued a final report that seriously addressed the ramifications of the epidemic for American society as a whole.

"In persuasive detail...Kahn demonstrates [that] the struggle against AIDS requires a continuous fight against vested interests that have little regard for alternative ideas and against egotists who put self-aggrandizement above a worldwide crisis.... Arthur Kahn's book presents the history of the clinical struggle and identifies heroes, many of whom have died fighting for all of us. Their efforts must be recognized. Their struggle is not over."