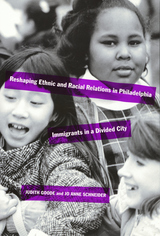 What happens when people from diverse racial and ethnic backgrounds come together to live and work in the same neighborhood? Unlike other examinations of this question that focus on one group, this book looks at the interaction of both old and new immigrant populations in three Philadelphia neighborhoods.

In this ethnographic study, which is a result of the Ford Foundation-funded Changing Relations: Newcomers and Established Residents in Philadelphia Project, the authors consider five primary groups—whites, African Americans, Puerto Ricans, Koreans, and Eastern Europeans—in Olney, Kensington, and Port Richmond. Focusing on the interaction of racial, ethnic, and immigrant communities in schools, organized community celebrations and social events, the workplace, shopping areas, and neighborhood politics, the authors show that the contradictions of individual beliefs, actions, and strategies of power are not easily resolved.

AUTHOR BIOGRAPHY
Judith Goode is Professor of Anthropology and Affiliated Professor of Geography and Urban Studies at Temple University. She has co-authored several books on topics related to urban anthropology, including The Anthropology of the City.
REVIEWS

"[T]his is an excellent book that I would like to be able to use in courses about race and ethnicity at both the graduate and undergraduate level. The ideas are very worthwhile, carefully documented, and well thought through." —Anthropology and Education Quarterly

Part I: The Citywide Context
2. The Political Economy of Philadelphia
3. The Effects of New Immigration on Social Categories and Human-Relations Institutions