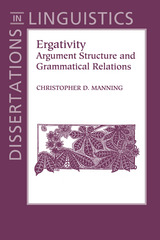 This volume considers and examines some of the phenomena that have led languages to be considered 'ergative'. Languages considered 'ergative' have only been sparsely studied, and many fundamental questions in their analysis seem at best incompletely answered. This volume fills that void by focussing on some of the basic issues: when ergativity should be analyzed as syntactic or morphological; whether languages can be divided into two classes of syntactically and morphologically ergative languages, and if so where the division should be drawn; and whether ergative arguments are always core roles or not.

This volume combines good scholarship with innovative ideas into an important work that will appeal to a wide range of linguists and scholars.
TABLE OF CONTENTS