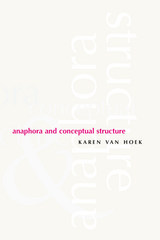 Karen van Hoek presents a cogent analysis of the classic problem of constraints on pronominal anaphora within the framework of Cognitive Grammar. Van Hoek proceeds from the position that grammatical structure can be characterized in terms of semantic and phonological representations, without autonomous syntactic structures or principles such as tree structures or c-command. She argues that constraints on anaphora can be explained in terms of semantic interactions between nominals and the contexts in which they are embedded.

Integrating the results of previous work, Van Hoek develops a model in which some nominals function as "conceptual reference points" that dominate over stretches defined by the semantic relations among elements. When a full noun is in the domain of a reference point, coreference is ruled out, since the speaker would be sending contradictory messages about the salience of the noun's referent.

With profound implications for the nature of syntax, this book will interest theoretical linguists of all persuasions.

AUTHOR BIOGRAPHY
Karen van Hoek is assistant professor of linguistics at the University of Michigan.
TABLE OF CONTENTS