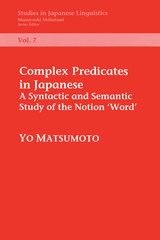 In this thoroughly revised version of 1992 Stanford dissertation, the author presents an extensive discussion of Japanese complex predicates. A broad range of constructions and predicates are discussed, which include predicative complement constructions, light verbs, causative predicates, desiderative predicates, syntactic and lexical compound verbs, and complex motion predicates. A number of new interesting facts are uncovered, and a detailed syntactic and semantic analyses are presented. On the basis of the analyses, the author argues that the notion 'word' must be relativized to at least three different senses: morphological, grammatical (functional), and semantic; and that this observation can be insightfully captured in the theory of Lexical-Functional Grammar. Previous proposals for each type of predicate that involve such mechanisms as argument transfer, incorporation, restructuring, etc. are thoroughly reviewed. Concrete proposals on the constraints on semantic wordhood are also made (an issue rarely discussed in the literature), drawing insights from cognitive linguistics.
TABLE OF CONTENTS