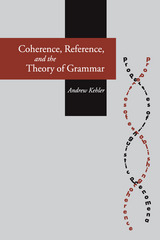 A natural language discourse is more than an arbitrary sequence of utterances; a discourse exhibits coherence. Despite its centrality to discourse interpretation, coherence rarely plays a role in theories of linguistic phenomena that apply across utterances.

In this book, Andrew Kehler provides an analysis of coherence relationships between utterances that is rooted in three types of 'connection among ideas' first articulated by the philosopher David Hume—Resemblance, Cause or Effect, and Contiguity. Kehler then shows how these relationships affect the distribution of a variety of linguistic phenomena, including verb phrase ellipsis, gapping, extraction from coordinate structures, tense, and pronominal reference. In each of these areas, Kehler demonstrates how the constraints imposed by linguistic form interact with those imposed by the process of establishing coherence to explain data that has eluded previous analyses. his book will be of interest to researchers from the broad spectrum of disciplines from which discourse is studied, as well as those working in syntax, semantics, computational linguistics, psycholinguistics, and philosophy of language.
TABLE OF CONTENTS