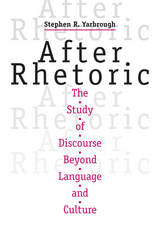 Aware that categorical thinking imposes restrictions on the ways we communicate, Stephen R. Yarbrough proposes discourse studies as an alternative to rhetoric and philosophy, both of which are structuralistic systems of inquiry.

Discourse studies, Yarbrough argues, does not support the idea that languages, cultures, or conceptual schemes in general adequately describe linguistic competence. He asserts that a belief in languages and cultures "feeds a false dichotomy: either we share the same codes and conventions, achieving community but risking exclusivism, or we proliferate differences, achieving choice and freedom but risking fragmentation and incoherence." Discourse studies, he demonstrates, works around this dichotomy.

Drawing on philosopher Donald Davidson, Yarbrough establishes the idea that community can be a consequence of communication but is not a prerequisite for it. By disassociating our thinking from conceptual schemes, we can avoid the problems that come with believing in an abstract structure that predates any utterance.

Yarbrough also draws on Mikhail Bakhtin's dialogism to define how utterances operate in life and to show how utterances are involved with power and how power relates to understanding. His discussion of Michel Meyer's problematology treats the questions implied by a statement as the meaning of the statement.

Yarbrough introduces readers to a credible theoretical framework for focusing on discourse rather than on conceptual schemes that surround it and to the potential advantages of our using this approach in daily life.

Stephen R. Yarbrough is the Class of ’52 Distinguished Professor of English at the University of North Carolina at Greensboro. His books include Inventive Intercourse: From Rhetorical Conflict to the Ethical Creation of Novel Truth and Deliberate Criticism: Toward a Postmodern Humanism.

“The discussion of the differences between force and power has wide-ranging implications not only for discourse theory and rhetoric, but for understanding the concept of ‘power’ in thinkers like Nietzsche, Foucault, and even Freud and Lacan. [This book] is a significant contribution to the study of rhetoric and to other fields.”—Ronald Schleifer, author of Rhetoric and Death: The Language of Modernism and Postmodern Discourse Theory and coeditor of Contemporary Literary Criticism

“[After Rhetoric is] a book the field of rhetoric and composition should take very seriously . . . [and is] a courageous attempt to challenge directly a number of central beliefs in the field today.”—JAC