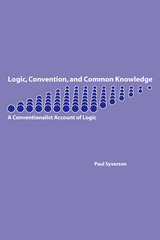 One of the fundamental theses of this book is that logical consequence and logical truth are not simply given, but arise as conventions among the users of logic. Thus Syverson explains convention within a game-theoretic framework, as a kind of equilibrium between the strategies of players in a game where they share common knowledge of events—a revisiting of Lewis's Convention that argues that convention can be reasonably treated as coordination equilibria. Most strikingly, a realistic solution is provided for Gray's classic coordination problem, wherein two generals can only communicate with each other through unreliable means.
TABLE OF CONTENTS