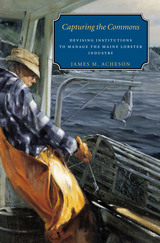 One of the most pressing concerns of environmentalists and policy makers is the overexploitation of natural resources. Efforts to regulate such resources are too often undermined by the people whose livelihoods depend on their use. One of the great challenges for wildlife managers in the twenty-first century is learning to create the conditions under which people will erect effective and workable rules to conserve those resources. James M. Acheson, author of the best-selling Lobster Gangs of Maine (the seminal work on the culture and economics of lobster fishing), here turns his attention to the management of the lobster industry. In this illuminating new book, he shows that resource degradation is not inevitable. Indeed, the Maine lobster fishery is one of the most successful fisheries in the world. Catches have been stable since World War II, and record highs have been achieved since the late 1980s. According to Acheson, these high catches are due, in part, to the institutions generated by the lobster-fishing industry to control fishing practices. These rules are effective. Rational choice theory frames Acheson’s down-to-earth study. Rational choice theorists believe that the overexploitation of marine resources stems from their common-pool nature, which results in collective action problems. In fisheries, what is rational for the individual fishermen can lead to disaster for the society. The progressive Maine lobster industry, lobster fishermen, and local groups have solved a series of such problems by creating three different sets of regulations: informal territorial rules; rules to control the number of traps; and formal conservation legislation. In recent years, the industry has successfully influenced new regulations at the federal level and has developed a strong co-management system with the Maine government. The process of developing these rules has been quite acrimonious; factions of fishermen have disagreed over lobster rules designed to give commercial advantage to one group or another. Although fishermen and scientists have come to share a conservation ethic, they often disagree over how to best conserve the lobster and even the quality of science. The importance of Capturing the Commons is twofold: it provides a case study of the management of one highly successful fishery, which can serve as a management model for policy makers, politicians, and local communities; and it adds to the body of theory concerning the conditions under which people will and will not devise institutions to manage natural resources.
AUTHOR BIOGRAPHY
JAMES M. ACHESON is Professor of Anthropology and Marine Sciences at the University of Maine. He is author of The Lobster Gangs of Maine (UPNE 1988), one of the first popular studies of the lobster industry.
TABLE OF CONTENTS


List of Illustrations • Acknowledgements • Introduction • Spatial Strategies and Territoriality • The Island Game: Informal Rules and the Factors Producing Them • The Genesis of State Laws for the Lobster Industry • Co-management in the Maine Lobster Industry • Science and Local Knowledge • Dealing with the Feds • The Politics of Science • Conclusion • Notes • References Cited • Index