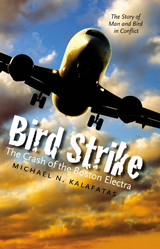 On a warm and golden afternoon, October 4, 1960, a Lockheed Electra jet turboprop carrying 72 souls took off from Logan Airport. Seconds later, the plane slammed into a flock of 10,000 starlings, and abruptly plummeted into Winthrop Harbor. The collision took 62 lives and gave rise to the largest rescue mobilization in Boston’s history, which included civilians in addition to police, firefighters, skindivers, and Navy and Coast Guard air-sea rescue teams. Largely because of the quick action and good seamanship of Winthrop citizens, many of them boys in small boats, ten passengers survived what the Civil Aeronautics Board termed “a non-survivable crash.” Using firsthand interviews with survivors of the crash, rescuers, divers, aeronautics experts, and ornithologists, as well as a wide range of primary source material, Kalafatas foregrounds the story of the crash and its aftermath to anchor a broader inquiry into developments in the aeronautics industry, the increase in the number of big birds in the skies of North America, and the increasing danger of “bird strikes.” Along the way he looks into interesting historical sidelights such as the creation of Logan Airport, the transformation of Boston’s industrial base to new technologies, and the nature of journalistic investigations in the early 1960s. The book is a rare instance when an author can simultaneously write about a fascinating historical event and a clear and present danger today. Kalafatas calls for and itemizes solutions that protect both birds and the traveling public.
AUTHOR BIOGRAPHY
MICHAEL N. KALAFATAS is author of The Bellstone: The Greek Sponge Divers of the Aegean, and for more than twenty years served as director of admissions at Brandeis University.
TABLE OF CONTENTS


Preface: A Clear and Present Danger • Appointment in Samarra • Crimson Sunset • Fading October Light • The Case of the Boston Electra • Sharing the Skies: The Problems • Sharing the Skies: The Solutions • The Making of a Patron Saint • Epilogue: Mozart and the Starling • Acknowledgments • Vital Statistics of the Boston Electra • Select Bibliography • Illustrations follow page 98