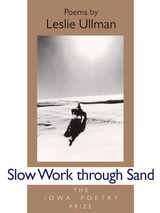 For a number of years, Leslie Ullman has lived in the Southwest, on cultivated land, in the company of horses and with access to uncultivated desert. The seasons and conditions of this starkly appealing land have found their way into the poet and her work. In her poems there always seems to be someone who is making herself over from scratch. Ullman creates origins for herself in nature, in solitude, in animals, and of course through those aspects of human relationships that teach important lessons.

Since winning the prestigious Yale Younger Poets Award in 1979, Ullman has manifested her love of language as both writer and teacher. As she remembers from her youthful summers in a Wisconsin lake lodge: “Sometimes the words I read were the tap of rain on the roof or the fire snapping in its great stone bed, but mostly they bloomed as the sound of the lake, a mantra against the weathered dock.” She writes that her book may be trying to validate the “history of women”—the title of one of the poems—just as “men's history has always validated hugely and by implication the way we use language and the way history has been taught.”Hers is not a defensive or an angry intention, however, but an exciting one. Slow Work through Sand attempts simply to make visible “the dance a woman's life is, not apart from other dances, but as a valid dance among dances.”

Leslie Ullman is the author of two previous collections of poetry, Natural Histories and Dreams by No One’s Daughter. She directs the creative writing program at the University of Texas-El Paso and also is on the faculty of the MFA program at Vermont College.