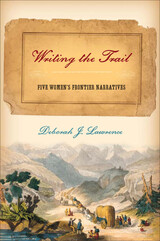 For a long time, the American West was mainly identified with white masculinity, but as more women’s narratives of westward expansion came to light, scholars revised purely patriarchal interpretations. Writing the Trail continues in this vein by providing a comparative literary analysis of five frontier narratives---Susan Magoffin’s Down the Santa Fe Trail and into Mexico, Sarah Royce’s A Frontier Lady, Louise Clappe’s The Shirley Letters, Eliza Farnham’s California, In-doors and Out, and Lydia Spencer Lane’s I Married a Soldier---to explore the ways in which women’s responses to the western environment differed from men’s.Throughout their very different journeys---from an eighteen-year-old bride and self-styled “wandering princess” on the Santa Fe Trail, to the mining camps of northern California, to garrison life in the Southwest---these women moved out of their traditional positions as objects of masculine culture. Initially disoriented, they soon began the complex process of assimilating to a new environment, changing views of power and authority, and making homes in wilderness conditions.Because critics tend to consider nineteenth-century women’s writings as confirmations of home and stability, they overlook aspects of women’s textualizations of themselves that are dynamic and contingent on movement through space. As the narratives in Writing the Trail illustrate, women’s frontier writings depict geographical, spiritual, and psychological movement. By tracing the journeys of Magoffin, Royce, Clappe, Farnham, and Lane, readers are exposed to the subversive strength of travel writing and come to a new understanding of gender roles on the nineteenth-century frontier.
AUTHOR BIOGRAPHY
Deborah Lawrence is associate professor of English at California State University, Fullerton. Her current project is a study of the historic trails of the Southwest.
REVIEWS

“Deborah Lawrence effectively translates scholarship into lucid prose that interconnects history, biography, analysis, and scholarship. She breaks new ground with her selection of writers and gives us fresh insight into the cultural dynamics of an age as well as the evolution of modern, industrial, and postindustrial American life. Writing the Trail is a significant contribution to women’s studies, American literature, American western literature, and memoir/life-writing studies.”---Susan Naramore Maher, professor and chair, University of Nebraska at Omaha