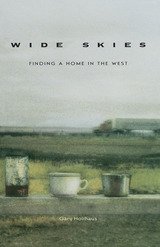 "Like many other Americans, judging from the amount of predawn traffic, I am on the move, scurrying through the dark like a coyote, nose down in pursuit of something-my work, an ephemeral desire that has no name, a life, an end of restlessness, a true place in the world."

A true place in the world: how many people have looked for it and how many have finally found it in the American West? Here, with writer Gary Holthaus, readers will reflect upon their own sense of place as they travel the lands and enter the lives of people in small towns and on ranches all over the West from Utah to Oregon to Alaska. Farmers and merchants, writers and teachers, truckers and trappers: their stories ring with hope and fear as their wide-open spaces increasingly come under siege.

Here are reflections on a long journey, together with notes of a personal odyssey and a plea for preserving the West's natural beauty-its meadows and mountains, its bears and Golden Eagles, its antelope and wolverines. This is important, says Holthaus, because if the region is home for him and for others, too, then it is crucial for newcomers and old-timers alike not to "further foul a nest that is becoming increasingly crowded." As he finds his way and adjusts his eyes to modern realities of greed and indifference, he also comes to grips with loss and learns to balance "the harm one inevitably does" with acts of compassion and positive change.

Deep in the national consciousness, the mythical West of film and fiction continues to shape our vision of ourselves as Americans. This book is a view not from the media, not from think tanks or legislators or policy makers, but from Westerners themselves, who tell us about the circumstances of their lives. Their West is indisputably the real West, and only as we come to understand better its realities will we come to know ourselves both as individuals and as a nation.
AUTHOR BIOGRAPHY
Gary H. Holthaus is the author of Unexpected Manna and Circling Back. He currently resides in Red Wing, Minnesota.