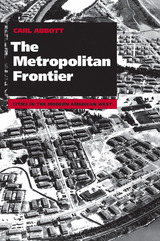 When the American West represented the country’s frontier, many of its cities may have seemed little more than trading centers to serve the outlying populace. Now the nation’s most open and empty region is also its most heavily urbanized, with eighty percent of Westerners living in its metropolitan areas. The process of urbanization that had already transformed the United States from a rural to an urban society between 1815 and 1930 has continued most clearly and completely in the modern West, where growth since 1940—spurred by mobilization for World War II—has constituted a distinct era in which Western cities have become national and even international pacesetters.

The Metropolitan Frontier places this last half-century of Western history in its urban context, making it the first comprehensive overview of urban growth in the region. Integrating the urban experience of all nineteen Western states, Carl Abbott ranges for evidence from Honolulu to Houston and from Fargo to Fairbanks to show how Western cities organize the region's vast spaces and connect them to the even larger sphere of the world economy. His survey moves from economic change to social and political response, examining the initial boom of the 1940s, the process of change in the following decades, and the ultimate impact of Western cities on their environments, on the Western regional character, and on national identity.

Today, a steadily decreasing number of Western workers are engaged in rural industries, but Western cities continue to grow. As ecological and social crises begin to affect those cities, Abbott’s study will prove required reading for historians, geographers, sociologists, urban planners, and all citizens concerned with America’s future.
AUTHOR BIOGRAPHY
Carl Abbott is the author of eight previous books, including The New Urban America: Growth and Politics in Sunbelt Cities. He is a professor of urban studies and planning at Portland State University.