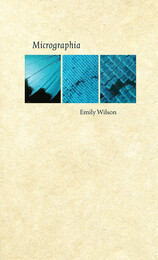 Eight years after her revelatory first book, Emily Wilson deepens her focus and extends her vision in new poems of striking intelligence and originality. Venturing into landscapes both interior and exterior, Micrographia explores what Wilson calls “the complex rigged wildness” of geographical, emotional, and verbal states, a territory located “somewhere in that / enjambment within / a cave within the brain.” Following in the tradition of such poets as Dickinson, Bishop, and Ammons, Wilson’s work regards the mind as “enmeshed” with the natural world, always “at the hinge of going over.” Her way of speaking is as precisely calibrated and as restless as her way of seeing, and the terrain of Micrographia rises from a rich and unpredictable encounter with poetic language and form. At the same time, the voice of these poems is never less than urgent, “coming clear by the foment / moving through it.”

Wilson’s eye travels the troubled boundaries between visible and invisible worlds, ranging from coastal Nova Scotia to the Andean highlands to Brooklyn’s industrial Gowanus Canal to the poet’s own backyard. Steeped in tradition but spoken in tones that are utterly distinctive, these intricate poems enter into the microscopic, micrographic spaces between words and things, between thinking and being.

AUTHOR BIOGRAPHY
Emily Wilson is the author of The Keep (Iowa, 2001). She holds degrees from Harvard and the University of Iowa Writers’ Workshop and is the recipient of a fellowship from the National Endowment for the Arts. She lives in Brooklyn.
TABLE OF CONTENTS