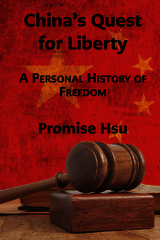 China's Quest for Liberty: A Personal History of Freedom
by Promise Hsu
foreword by Ellis Sandoz
St. Augustine's Press, 2014
Cloth: 978-1-58731-109-3
China’s Quest for Liberty is a personal story of a young man fully engaged in understanding the world he was born into and working toward making that world into a better and freer place to life. It is about an unexpected journey a Chinese journalist has taken to pursue freedom, involving such diverse fields or disciplines as politics, business, humanities, science and technology, government agencies and non-governmental organizations. Some took place as daily life, and some occurred in detentions or disasters.

It is about a world whose dimensions have been basically obscured not only in China but also in the global public square, and walk with this young journalist, step by step, to find, paradoxically, the hope in the depth of hopelessness, the strength in acknowledging weakness, the change in substance by, among other things, keeping the form unchanged for at least a while, the youth in growing up despite growing old, the invisible in the visible, the imperishable in the perishable, the reality in the shadow of numerous fake realities, and the freedom gained not mainly through human efforts but as mercy and grace from the one who created humans and other beings.

As well as digging out the overlooked Christian background in the rise of the sanctity of human life, creative culture, constitutionalism, work as a vocation, modern management, servant leadership, and catchphrases like “the global village” and “The medium is the message”, the author tells of insider observations about the rise of Christianity in China generally and about Shouwang Church in particular. Through sharing these findings, this book aims to show how the one who made the universe rules the world and how this creator sets his creatures free by himself.

China’s Quest for Liberty is a fascinating work of nuance and surprise.