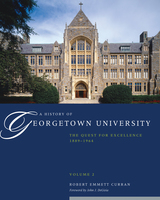 The discovery and imparting of knowledge are the essential undertakings of any university. Such purposes determined John Carroll, SJ's modest and surprisingly ecumenical proposal to establish an academy on the banks of the Potomac for the education of the young in the early republic. What began earnestly in 1789 still continues today: the idea of Georgetown University as a Catholic university situated squarely in the American experience.

Beautifully designed with over 300 illustrations and photographs, A History of Georgetown University tells the remarkable story of the administrators, boards, faculty, students, and programs that have made Georgetown a leading institution of higher education. With a keen eye for detail, historian Robert Emmett Curran—a member of the Georgetown community for over three decades—explores the broader perspective of Georgetown's sense of identity and its place in American culture.

Volume One traces Georgetown’s evolution during its first century, from its beginnings as an academy within the American Catholic community of the Revolutionary War era through its flowering as a college before the Civil War to its postbellum achievements as a university. Volume Two highlights the efforts of administrators and faculty over the next seventy-five years to make Georgetown an ascending and increasingly diverse institution with a range of graduate programs and professional schools. Volume Three examines Georgetown’s remarkable rise to prominence as an internationally recognized research university—both culturally engaged and cosmopolitan while remaining grounded in its Catholic and Jesuit character.

Each volume features numerous illustrations, photographs, and appendices that include student demographics, enrollments, and lists of board members.

Robert Emmett Curran is a professor emeritus of history at Georgetown University, where he served as a faculty member for 32 years. He currently resides, with his wife Eileen, in Richmond, Kentucky.

1. Joseph Havens Richards and the Emergence of the University

2. Georgetown in the Early Twentieth Century

7. "We Are Eager to Render Service": The University and the Second World War

Part Three: Recovering the Idea of a Catholic University, 1945-1964

10. Toward the Fulfillment of a Vision