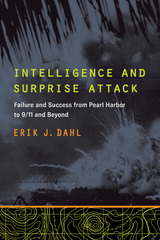 Intelligence and Surprise Attack: Failure and Success from Pearl Harbor to 9/11 and Beyond
by Erik J. Dahl
Georgetown University Press
Paper: 978-1-58901-998-0

How can the United States avoid a future surprise attack on the scale of 9/11 or Pearl Harbor, in an era when such devastating attacks can come not only from nation states, but also from terrorist groups or cyber enemies?

Intelligence and Surprise Attack examines why surprise attacks often succeed even though, in most cases, warnings had been available beforehand. Erik J. Dahl challenges the conventional wisdom about intelligence failure, which holds that attacks succeed because important warnings get lost amid noise or because intelligence officials lack the imagination and collaboration to “connect the dots” of available information. Comparing cases of intelligence failure with intelligence success, Dahl finds that the key to success is not more imagination or better analysis, but better acquisition of precise, tactical-level intelligence combined with the presence of decision makers who are willing to listen to and act on the warnings they receive from their intelligence staff.

The book offers a new understanding of classic cases of conventional and terrorist attacks such as Pearl Harbor, the Battle of Midway, and the bombings of US embassies in Kenya and Tanzania. The book also presents a comprehensive analysis of the intelligence picture before the 9/11 attacks, making use of new information available since the publication of the 9/11 Commission Report and challenging some of that report’s findings.

Erik J. Dahl is an assistant professor of national security affairs at the Naval Postgraduate School in Monterey, California. He is also a faculty member of the Center for Homeland Defense and Security (CHDS) at the Naval Postgraduate School. Previously, he was a fellow at the Belfer Center for Science and International Affairs at Harvard University, an instructor of joint military operations at the Naval War College, and served as an intelligence officer in the United States Navy.