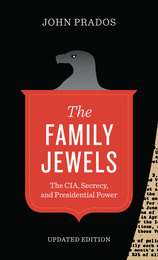 In December 1974, a front-page story in the New York Times revealed the explosive details of illegal domestic spying by the Central Intelligence Agency. This included political surveillance, eavesdropping, detention, and interrogation. The revelation of illegal activities over many years shocked the American public and led to investigations of the CIA by a presidential commission and committees in both houses of Congress, which found evidence of more abuse, even CIA plans for assassinations. Investigators and the public soon discovered that the CIA abuses were described in a top-secret document agency insiders dubbed the “Family Jewels.” That document became ground zero for a political firestorm that lasted more than a year. The “Family Jewels” debacle ultimately brought about greater congressional oversight of the CIA, but excesses such as those uncovered in the 1970s continue to come to light.

The Family Jewels probes the deepest secrets of the CIA and its attempts to avoid scrutiny. John Prados recounts the secret operations that constituted “Jewels” and investigators’ pursuit of the truth, plus the strenuous efforts—by the agency, the executive branch, and even presidents—to evade accountability. Prados reveals how Vice President Richard Cheney played a leading role in intelligence abuses and demonstrates that every type of “Jewel” has been replicated since, especially during the post-9/11 war on terror. The Family Jewels masterfully illuminates why these abuses are endemic to spying, shows that proper relationships are vital to control of intelligence, and advocates a system for handling “Family Jewels” crises in a democratic society.

With a new epilogue that discusses former CIA employee Edward Snowden’s revelation of massive covert surveillance by the NSA, this powerful accounting of intelligence abuses committed by the CIA from the Cold War through the war on terror reveals why such abuses and attempts to conceal them are endemic to spying and proposes how a democratic nation can rein in its spymasters.

AUTHOR BIOGRAPHY
John Prados is a senior fellow of the National Security Archive in Washington, DC, where he helps bring newly declassified government records to public attention. He is the award-winning author of twenty-one books, including Islands of Destiny: The Solomons Campaign and the Eclipse of the Rising Sun. He also lectures widely on security, freedom of information, and other issues; analyzes combat processes; serves as a historical adviser to filmmakers; and designs strategy board games, including the well-known Third Reich and other award-winning titles.
TABLE OF CONTENTS