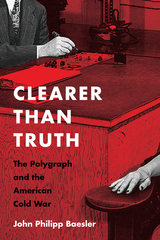 A person strapped to a polygraph machine. Nervous eyes, sweaty brow, the needle trembling up and down. Few images are more evocative of Cold War paranoia.

In this first comprehensive history of the polygraph as a tool and symbol of American Cold War policies, John Philipp Baesler tells the story of a technology with weak scientific credentials that was nevertheless celebrated as a device that could expose both internal and external enemies. Considered the go-to technology to test agents' and employees' loyalty, the polygraph's true power was to expose deep ideological and political fault lines. While advocates praised it as America's hard-nosed yet fair answer to communist brainwashing, critics claimed that its use undermined the very values of justice, equality, and the presumption of innocence for which the nation stood.