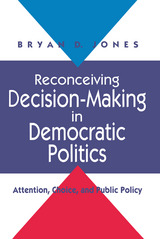 Most models of political decision-making maintain that individual preferences remain relatively constant. Why, then, are there often sudden abrupt changes in public opinion on political issues? Or total reversals by politicians on specific issues? Bryan D. Jones answers these questions by innovatively connecting insights from cognitive science and rational choice theory to political life.

Individuals and political systems alike, Jones argues, tend to be attentive to only one issue at a time. Using numerous examples from elections, public opinion polls, congressional deliberations, and of bureaucratic decision-making, he shows how shifting attentiveness can and does alter choices and political outcomes—even when underlying preferences remain relatively fixed. An individual, for example, may initially decide to vote for a candidate because of her stand on spending but change his vote when he learns of her position on abortion, never really balancing the two options.
TABLE OF CONTENTS