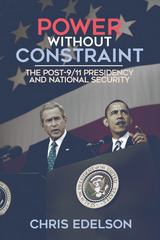 As a presidential candidate, Barack Obama criticized the George W. Bush administration for its unrestrained actions in matters of national security. Yet President Obama has not fulfilled candidate Obama's promise to restore the rule of law and make a clean break with his predecessor.

In Power without Constraint Chris Edelson offers a thorough, extensive comparison of the Bush and Obama administrations' national security policies, arguing that both have asserted more executive authority than previous presidents. He examines once-secret Justice Department memos in which President Bush's officials claimed for the executive branch plenary unilateral authority to use military force in response to threats of terrorism, as well as the power to set aside laws made by Congress, even criminal laws prohibiting torture and warrantless surveillance. He acknowledges that President Obama and his officials have not claimed the authority to set aside criminal laws, relying on softer rhetoric and toned-down legal arguments to advance their policies. But, in key areas—military action, surveillance, and state secrets—they have simply found new ways to assert power without meaningful constitutional or statutory constraints.

Edelson contends that this legacy of the two immediately post-9/11 presidencies raises crucial questions for future presidents, Congress, the courts, and American citizens. Where is the political will to restore a balance of powers among branches of government and adherence to the rule of law? What are the limits of authority regarding presidential national security power? Have national security concerns created a permanent shift to unconstrained presidential power?

AUTHOR BIOGRAPHY
Chris Edelson is assistant professor of government in the School of Public Affairs and a fellow with the Center for Congressional and Presidential Studies, both at American University. He is the author of Emergency Presidential Power: From the Drafting of the Constitution to the War on Terror, which was awarded the Crader Family Book Prize in American Values.
TABLE OF CONTENTS