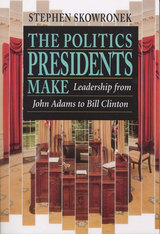 Stephen Skowronek’s wholly innovative study demonstrates that presidents are persistent agents of change, continually disrupting and transforming the political landscape. In an afterword to this new edition, the author examines “third way” leadership as it has been practiced by Bill Clinton and others. These leaders are neither great repudiators nor orthodox innovators. They challenge received political categories, mix seemingly antithetical doctrines, and often take their opponents’ issues as their own.