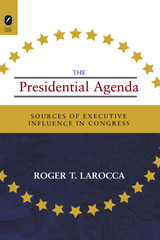 It is well understood that the president is a powerful agenda-setting influence in Congress. But how exactly does the president, who lacks any formal power in early stages of the legislative process, influence the congressional agenda? In The Presidential Agenda, Roger T. Larocca argues that the president’s agenda-setting influence arises from two informal powers: the ability to communicate directly to voters and the ability to control the expertise of the many executive agencies that advise Congress on policy.
​Larocca develops a theoretical model that explains how the president can raise the public salience of issues in his major addresses, long accepted as one of the president’s strongest agenda-setting tools. He also develops a theoretical model that explains how control over executive agency expertise yields a more reliable and persistent influence on the congressional agenda than presidential addresses.
The Presidential Agenda tests these theoretical models with an innovative empirical study of presidential agenda setting. Using data from all House and Senate Commerce Committee bills from 1979 to 2002, Larocca converts information about bills into information about policy issues and then traces the path of presidential influence through the committee and floor stages of legislative consideration.
AUTHOR BIOGRAPHY
Roger T. Larocca is assistant professor of political science at Oakland University.
TABLE OF CONTENTS