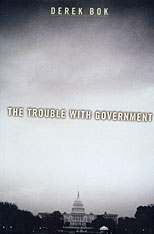 In the past thirty years, Americans have lost faith in their government and the politicians who lead it. They have blamed Washington for a long list of problems, ranging from poor schools to costly medical care to high rates of violent crime. After investigating these complaints and determining that many are justified, Derek Bok seeks to determine the main reasons for the failings and frustrations associated with government.

Discounting three common explanations--deteriorating leadership, the effect of the media on the political process, and the influence of interest groups--Bok identifies four weaknesses that particularly need explaining: a persistent tendency by Congress to design programs poorly; to impose expensive and often quixotic regulations that produce only modest results; to do less than other leading democracies to protect working people from illness, unemployment, and other basic hazards of life; and to leave large numbers of people, especially children, living in poverty.

Bok goes on to explore the reasons for these fundamental weaknesses and to discuss popular remedies such as term limits, devolution, "reinventing" government, and campaign finance reform. While some of these proposals have merit, Bok finds a deeper, more troubling paradox: Americans want to gain more power over their government, but are devoting less time to exerting a constructive influence. Their dissatisfaction with government is growing as their participation in the political process is declining. These contradictory trends, Bok argues, contribute to the problems of our democracy. Fortunately, there are many concrete steps that Americans can take to be politically engaged and to help their government improve its performance.

"Democracy," Bok concludes, "is a collective venture which falters or flourishes depending on the efforts citizens invest in its behalf."

PART I: Is Anything Wrong?
1. Is America on the Wrong Track?
2. The Role of Government

PART II: Looking for Reasons
3. The Usual Suspects
4. What Do We Need to Explain?
5. Why Legislation Is Often Badly Designed
6. Why Regulation Makes So Many People Angry
7. Why Working People and the Poor Do Badly


PART IV: The Role of the People
14. How Much Influence Do Citizens Have?
15. How Capable Are Americans of Self-Government?
16. The Ambitions and Realities of Civic Participation
17. Building Citizenship

Reviews of this book:
The former president of Harvard, Bok corroborates the perception of government failure...Surprisingly, [he] exculpates the usual villains. Special-interest groups and the sensationalist media deserve far less blame for our political malaise, he asserts, than does a system that frames regulations as rules of legal combat, not protocols for cooperation, and that denies the underclass a meaningful place in public debates...In his broader critique, he challenges a self-indulgent electorate to renew the civic virtues essential to wise governance...In his agenda for national renewal, he challenges us all to enlarge the possibilities for a vibrant democracy.
--Bryce Christensen, Booklist

Reviews of this book:
Here, [Bok] looks at why our laws and regulations are often badly designed and executed, why other nations surpass us in creating opportunities and safeguards for low-income citizens, and how we might improve. Examining hundreds of remedies, he concludes that policy is less the culprit than...public apathy...Readers will hardly find [this book's] match as an accessible and fair summary of current policy and institutional questions...This is a book for nearly every library.
--Library Journal

Reviews of this book:
Distrust of government is nothing new, [Bok] allows; it was a common trope in the days of Washington, Jefferson, and Adams. What is different, he suggests, is that today, for the first time in history, American citizens demand services--police protection, health care, subsidies of various kinds--from a government in which they have no faith, a situation that is a cynic's delight. The author argues that, in many respects, government is better than it has ever been in delivering such services, and that...the basis of [Americans'] complaining is often groundless and reactionary. American politicians have harmed themselves and their constituents by giving that culture of complaint too much heed, Bok suggests, and have given far too much credence to the opinion of a public that has taken no trouble to do any homework.
--Kirkus Reviews

Reviews of this book:
Surely, no book could be more timely than The Trouble with Government by former Harvard University President Derek Bok, who laments the laws of the United States tend to be 'a clumsy patchwork of compromises rather than well-crafted documents to achieve intended results'...Bok has written a carefully nuanced survey of the American system of government that contains...some worthwhile recommendations.
--Mike Leary, Baltimore Sun

Reviews of this book:
The Trouble with Government sets out to explore the reasons for [the government's] shortcomings and what can be done to overcome them. In doing so, Bok demonstrates how a number of the most popular complaints and proposed solutions are off the mark...He's particularly astute regarding pitfalls of understandably popular measures which are intended to put power more directly into the hands of the people, but frequently backfire, as when term limits put more power in the hands of lobbyists and bureaucrats...Bok brings a great deal of much-needed clarity and balance to the central subject of overall government performance.
--Paul Rosenberg, Commercial Appeal

Reviews of this book:
A primer that ought to be read by voters as well as by the President and members of Congress. This well-documented book...touches upon many of the issues raised in the last national election, including health care, social services, and campaign financing. Bok finds four basic weaknesses in government that call for reform...The remedies he proposes involve greater citizen participation in politics all year-round, especially engaging people of modest means.
--Herbert Mitgang, Chicago Tribune

Reviews of this book:
In The State of the Nation (1997), Bok compared the institutional performance of the United States with that of other advanced democracies; in The Trouble with Government, he examines Americans' attitudes toward their institutions...As an alternative to the conventional wisdom, Bok proposes a new emphasis on what he considers to be the...fundamental problems of the American political order...Derek Bok has performed a public service by discrediting a number of popular but misconceived political panaceas based on false diagnoses of what ails the American body politic.
--Michael Lind, New York Times Book Review

Reviews of this book:
As Derek Bok argues in this sweeping and provocative new book...the most significant problem facing America's vaunted system of self-government is not weak-kneed politicians, shallow reporters or even greedy special interests. It is We, the people. Based on wide-ranging comparisons with six other industrialized nations, Bok concludes that the United Nations--despite unrivaled wealth--has fallen dead last in a variety of important categories over the past four decades.
--John Hassell, Newark Star-Ledger

Reviews of this book:
Derek Bok's supremely rational book will not satisfy the anti-government brigades, nor will it come as much consolation to the defenders of those who make and implement national policy. Instead, his clarion call for Americans to become better, more engaged citizens, only after which will they get the government they reasonably deserve and expect.
--Jurek Martin, Barron's

Reviews of this book:
One of the clearest, most forceful statements yet about the state of our government. High marks go to the economy and higher (not lower) education; failing grades are dispensed to health care, protecting the environment, and poverty. Why has government failed in these and other critical areas? Because the American people no longer care. Read the rest of this stimulating yet disturbing book and hope that others do, too.
--Lee Milazzo, Dallas Morning News

Reviews of this book:
The Trouble with Government by Derek Bok demonstrates...that the findings of social scientists can be made to serve an important public purpose. Bok draws persuasively on reams of social science studies to make sense of one Big Question: What is wrong with the US Government and how can it be improved? Bok, the President Emeritus of Harvard University, has produced a magisterial tome that will inform and educate political scientists and concerned citizens alike. The book is clearly written, balanced and concise, despite its 400 pages.
--Daniel A. Bell, Times Literary Supplement