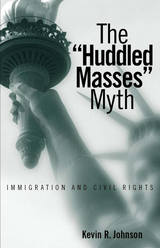 Despite rhetoric that suggests that the United States opens its doors to virtually anyone who wants to come here, immigration has been restricted since the nation began. In this book, Kevin R. Johnson argues that immigration policy reflects the social hierarchy that prevails in American society as a whole and that immigration reform is intertwined with the struggle for civil rights.The "Huddled Masses" Myth focuses on the exclusion of people of color, gays and lesbians, people with disabilities, the poor, political dissidents, and other disfavored groups, showing how bias shapes the law. In the nineteenth century, for example, virulent anti-Asian bias excluded would-be immigrants from China and severely restricted those from Japan. In our own time, people fleeing persecution and poverty in Haiti generally have been treated much differently from those fleeing Cuba. Johnson further argues that although domestic minorities (whether citizens or lawful immigrants) enjoy legal protections and might even be courted by politicians, they are regarded as subordinate groups and suffer discrimination. This book has particular resonance today as the public debates the uncertain status of immigrants from Arab countries and of the Muslim faith.
AUTHOR BIOGRAPHY
Kevin R. Johnson is Associate Dean as well as Professor of Law and Chicana/o Studies at The University of California, Davis. His book, How Did You Get to Be Mexican?: A White/Brown Man's Search for Identity was published by Temple in 1999.
REVIEWS
"In this compelling book, Kevin R. Johnson reveals the myth of the 'huddled masses,' turning a critical eye on the contradictions of U.S. immigration policies and practices. Whereas the U.S. proudly views itself as a nation of immigrants, many people arriving to its shores have been shunned, most notably people of color and the poor. In a post-September 11th world, Johnson gives us good reasons to renew—rather than restrict—our nations commitment to immigrants."—Michael Welch, Rutgers University, author of Detained: Immigration Laws and the Expanding INS Jail Complex


"The 'Huddled Masses' Myth is remarkably well conceived and written. Kevin Johnson takes up consistently interesting and fundamental questions about immigration law and then covers all the bases. He mounts his claims not through rhetoric, but through careful and meticulous work. This is a first-rate book on a very timely topic, and Johnson's treatment will prove to be very important in domestic debates about immigration."—Michael A. Olivas, William B. Bates Distinguished Chair of Law and Director, Institute for Higher Education Law and Governance, University of Houston Law Center


"Johnson's unique approach to both immigration and civil rights fills an important gap. He broadens the discussion by bringing together the discourse on race, ethnicity, immigration, and citizenship that until the last few years remained virtually isolated from each other. The 'Huddled Masses' Myth is an important contribution to moving away from a binary race paradigm and one that truly considers contemporary U.S. experience as well as challenging previous assumptions about the construction of race as black and white."—Mary Romero, School of Social Justice, Arizona State University, and author of Maid in U.S.A.