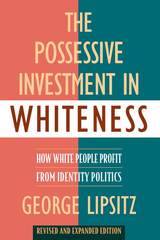 In this unflinching look at white supremacy, George Lipsitz argues that racism is a matter of interests as well as attitudes, a problem of property as well as pigment. Above and beyond personal prejudice, whiteness is a structured advantage that produces unfair gains and unearned rewards for whites while imposing impediments to asset accumulation, employment, housing, and health care for minorities. Reaching beyond the black/white binary, Lipsitz shows how whiteness works in respect to Asian Americans, Latinos, and Native Americans.Lipsitz delineates the weaknesses embedded in civil rights laws, the racial dimensions of economic restructuring and deindustrialization, and the effects of environmental racism, job discrimination and school segregation. He also analyzes the centrality of whiteness to U.S. culture, and perhaps most importantly, he identifies the sustained and perceptive critique of white privilege embedded in the radical black tradition. This revised and expanded edition also includes an essay about the impact of Hurricane Katrina on working class Blacks in New Orleans, whose perpetual struggle for dignity and self determination has been obscured by the city's image as a tourist party town.
AUTHOR BIOGRAPHY
George Lipsitz is Professor of Black Studies and Sociology at the University of California, Santa Barbara, and the author of A Life in the Struggle: Ivory Perry and the Culture of Opposition (Temple), Rainbow at Midnight: Labor and Culture in the 1940s, Dangerous Crossroads, and Time Passages.
TABLE OF CONTENTS