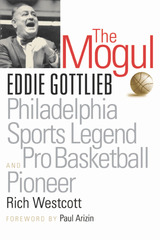 The Mogul: Eddie Gottlieb, Philadelphia Sports Legend and Pro Basketball Pioneer
by Rich Westcott
Temple University Press, 2008
Cloth: 978-1-59213-655-1
Eddie Gottlieb-The Mogul -was one of the most colorful figures in Philadelphia sports history.  A member of the Basketball Hall of Fame, he  founded, played and coached for the legendary South Philadelphia Hebrew Association (SPHAs) basketball team, helped form the National Basketball Association, owned the Warriors franchise, and created the NBA's annual schedule of games for over a quarter-century.  In baseball, he co-owned the Philadelphia Stars in the Negro Leagues and tried unsuccessfully to buy the Philadelphia Phillies.  Locally, he was the city's leading sports booking agent for activities ranging from sandlot baseball to semipro football to professional wrestling.

Drawing upon sixty-plus interviews and many archival sources, well-known Philadelphia sports historian Rich Westcott vividly portrays Gottlieb's role in a pivotal era in city sports, in the process offering histories of the SPHAs, Warriors, and Stars and the role of Jews and African Americans in the city's sporting history.
AUTHOR BIOGRAPHY
Rich Westcott is a writer and sports historian and a veteran of more than 40 years as a working journalist. He is a leading authority on the Phillies, and for 14 years was editor and publisher of Phillies Report. He is the author of 18 other books, including Veterans Stadium, Philadelphia’s Old Ballparks, The Phillies Encyclopedia (with Frank Bilovsky), and A Century of Philadelphia Sports. Westcott has seen or covered all the major teams in Philadelphia, including the Warriors and 76ers.
TABLE OF CONTENTS

1. From Russia to South Philly

3. Kings of the Court

4. They Were the Days

7. Owner of the Stars

8. Trying to Buy the Phillies

10. First Champions of the BAA

11. New Owner of the Warriors