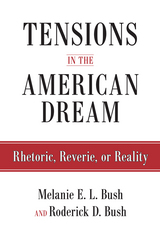 Could the promise of upward mobility have a dark side? In Tensions in the American Dream, Melanie and Roderick Bush ask, how does a "nation of immigrants" pledge inclusion, yet marginalize so many citizens based on race, class, and gender? The authors consider the origins and development of the U.S. nation and empire; the founding principles of belonging, nationalism, and exceptionalism; and their lived reality.

Tensions in the American Dream also addresses the relevancy of nation to empire in the context of the historical world capitalist system. The authors ask, is the American Dream a reality only questioned by those unwilling or unable to achieve it? What is the "good life" and how is it particularly "American"?
AUTHOR BIOGRAPHY
Melanie E. L. Bush is Associate Professor in the Department of Anthropology and Sociology at Adelphi University and author of Everyday Forms of Whiteness: Understanding Race in a "Post-Racial" World, the second edition of Breaking the Code of Good Intentions: Everyday Forms of Whiteness.

Roderick D. Bush (1945-2013) was Professor in the Department of Sociology and Anthropology at St. John's University, and the author of The End of White World Supremacy: Black Internationalism and the Problem of the Color Line (Temple), which won the Paul Sweezy Marxist Sociology Book Award from the American Sociological Association, and We Are Not What We Seem: Black Nationalism and Class Struggle in the American Century.
TABLE OF CONTENTS


List of Tables Preface PART I. INTRODUCTION 1. Key Questions and Concepts 2. Citizenship and Nation 3. The Shifting Terrain Makes Clear the Tensions in the American Dream PART II. STORIES OF MY AMERICA 4. Reflections on the Structural Logic of the System 5. Thoughts on the Current Juncture 6. Perspectives on the American Dream 7. Expressions of Revolt against the Systems PART III. TENSIONS IN THE AMERICAN DREAM: RHETORIC, REVERIE, OR REALITY? 8. Nation: Empire or Liberation 9. Racial Nationalism and the Multiple Crises of the U.S. Nation 10. Going Forward, with Reflections on the Revolts of the Past Decade   Acknowledgments  Notes  References  Index