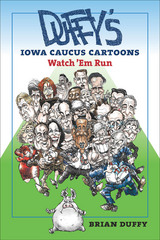 Brian Duffy has been poking fun at the Iowa caucuses for just about as long as they’ve been a media circus, since the 1970s. Now, the longtime editorial cartoonist has gathered a selection of his best images lampooning the politicians on their quadrennial stampedes through Iowa’s fields and towns.

Whether you’re anticipating or dreading the onset of another caucus season in 2016, this book will put it all into perspective. From Jimmy Carter’s innovative 1976 effort to Barack Obama’s come-from-behind win in 2008, from George H. W. Bush’s storming to victory in 1980 to George W. Bush’s coasting to his win in 2000, from Gary Hart’s peccadillos in 1988 to John Edwards’s missteps in 2008, from Elizabeth Dole’s determination to breach the White House boys’ club in 2000 to Hillary Clinton’s fall from frontrunner to third place in 2008, here is American presidential campaigning in all its glory. With pigs.
AUTHOR BIOGRAPHY
For nearly thirty years, Brian Duffy has been the cartoonist of record for the Iowa caucuses. From his perch in Des Moines, he has chronicled the winners, the runners-up, the also-rans, and the ones who never should have run. After twenty-five years as an award-winning front-page cartoonist for the Des Moines Register, he now places his cartoons in publications nationwide through King Features Syndicate, as well as publishing with KCCI TV, CityView, and The Hightower Report. His cycling cartoons have appeared in Momentum Magazine. He lives in Des Moines, Iowa.
TABLE OF CONTENTS
Contents
Foreword by David Yepsen
Introduction
1976
1980
1984
1988
1992
1996
2000
2004
2008
2012
REQUEST ACCESSIBLE FILE