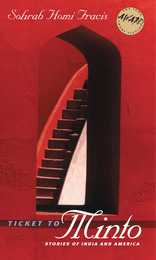 Ticket to Minto, Sohrab Homi Fracis's premier fiction collection, offers readers a passage to an unfamiliar destination-a world suspended between East and West, India and America, home and away.

With piercing insight, Fracis expertly reveals the underlying differences between immersion in India's culture-Hindu, Muslim, or Parsi-and life as an Indian in America. Alternating between East and West, the stories in Ticket to Minto serve as companion pieces, interrelated across continents in both theme and content. A middle-aged man's search for love in Bombay is contrasted with an Indian American family's hopes for the marriage of their westernized daughter. A university student rushes to save the life of a servant in his homeland only to find his own life threatened while attending graduate school in America.

Poignant and daring, Ticket to Minto underlines the harsh realization that the immigrant never truly arrives but is in constant limbo between two worlds. As one character relates, "There's a part of me that's American and a part that's Indian. I'm clear about that and comfortable with it, except that sometimes people want me to be just the one or the other."

Hamid Gets His Hair Cut