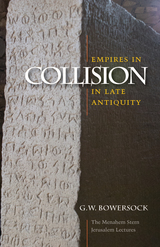 In this book, based on lectures delivered at the Historical Society of Israel, the famed historian G. W. Bowersock presents a searching examination of political developments in the Arabian Peninsula on the eve of the rise of Islam. Recounting the growth of Christian Ethiopia and the conflict with Jewish Arabia, he describes the fall of Jerusalem at the hands of a late resurgent Sassanian (Persian) Empire. He concludes by underscoring the importance of the Byzantine Empire’s defeat of the Sassanian forces, which destabilized the region and thus provided the opportunity for the rise and military success of Islam in the seventh century. Using close readings of surviving texts, Bowersock sheds new light on the complex causal relationships among the Byzantine, Ethiopian, Persian, and emerging Islamic forces.
AUTHOR BIOGRAPHY
G. W. BOWERSOCK is professor emeritus of ancient history at the Institute for Advanced Study, Princeton, New Jersey. His most recent book is From Gibbon to Auden: Essays on the Classical Tradition.
TABLE OF CONTENTS


Foreword by Albert I. Baumgarten • Preface • Byzantium, Ethiopia, and the Jewish Kingdom of South Arabia • The Persian Capture of Jerusalem • Heraclius’ Gift to Islam: The Death of the Persian Empire • Notes • Index