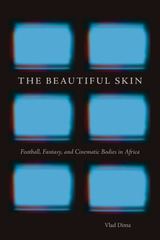 In this original and provocative study of contemporary African film and literature, Vlad Dima investigates the way that football and cinema express individual and collective fantasies, and highlights where football and cinema converge and diverge with regard to neocolonial fantasies. Shedding new light on both well-known and less familiar films by Mahamat-Saleh Haroun, Abderrahmane Sissako, Jean-Pierre Bekolo, Moussa Touré, Safi Faye, Cheick Doukouré, and Joseph Gaï Ramaka, among others, the study asks just whose fantasy is articulated in football and African cinema. Answering this question requires the exploration of body and identity issues, here through the metaphor of skin: fantasy as a skin; the football jersey as a skin; and ultimately film itself as a skin that has visual, aural, and haptic qualities. The neocolonial body is often depicted as suffering and in the process of being flattened or emptied. So frequently do African cinema and literature replicate this hollowed body, all skin as it were, that it becomes the very type of body that defines neocolonialism. Could the body of film—the depth of both characters and story within the cinematic skin—hold the key to moving into a post-neocolonial era, an era defined by “full” bodies and personal affirmation? This is the question Dima seeks to answer.
AUTHOR BIOGRAPHY
VLAD DIMA is an Associate Professor of African Cultural Studies and French at the University of Wisconsin–Madison. He has published numerous articles, mainly on French and francophone cinemas, but also on francophone literature, comics, American cinema, and television.
TABLE OF CONTENTS
Contents
Acknowledgments
Pre-Game, Also Known as the Introduction
Chapter 1. The Beautiful Fantasy
Chapter 2. The Beautiful Game
Chapter 3. The Beautiful Skin
Extra-Time, Also Known as the Conclusion
Notes
Filmography
Bibliography
Index
REQUEST ACCESSIBLE FILE