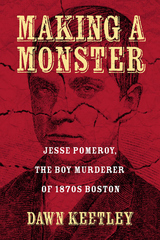 When twelve-year-old Jesse Pomeroy tortured seven small boys in the Boston area and then went on to brutally murder two other children, one of the most striking aspects of his case was his inability ever to answer the question of why he did what he did. Whether in court or in the newspapers, many experts tried to explain his horrible acts—and distance the rest of society from them. Despite those efforts, and attempts since, the mystery remains.

In this book, Dawn Keetley details the story of Pomeroy's crimes and the intense public outcry. She explores the two reigning theories at the time—that he was shaped before birth when his pregnant mother visited a slaughterhouse and that he imitated brutal acts found in popular dime novels. Keetley then thoughtfully offers a new theory: that Pomeroy suffered a devastating reaction to a smallpox vaccination which altered his brain, creating a psychopath who revealed the human potential for brutality. The reaction to Pomeroy's acts, then and now, demonstrates the struggle to account for exactly those aspects of human nature that remain beyond our ability to understand.
AUTHOR BIOGRAPHY
Dawn Keetley is professor of English at Lehigh University and editor of "We're All Infected": Essays on AMC's The Walking Dead and the Fate of the Human.
REVIEWS

-- Daniel A. Cohen, author of Pillars of Salt, Monuments of Grace: New England Crime Literature and the Origins of American Popular Culture, 1674--1900