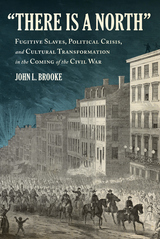 How does political change take hold? In the 1850s, politicians and abolitionists despaired, complaining that the “North, the poor timid, mercenary, driveling North” offered no forceful opposition to the power of the slaveholding South. And yet, as John L. Brooke proves, the North did change. Inspired by brave fugitives who escaped slavery and the cultural craze that was Uncle Tom’s Cabin, the North rose up to battle slavery, ultimately waging the bloody Civil War.

While Lincoln’s alleged quip about the little woman who started the big war has been oft-repeated, scholars have not fully explained the dynamics between politics and culture in the decades leading up to 1861. Rather than simply viewing the events of the 1850s through the lens of party politics, “There Is a North” is the first book to explore how cultural action—including minstrelsy, theater, and popular literature—transformed public opinion and political structures. Taking the North’s rallying cry as his title, Brooke shows how the course of history was forever changed.
AUTHOR BIOGRAPHY
JOHN L. BROOKE is Warner Woodring Chair and Arts & Sciences Distinguished Professor of History at the Ohio State University.