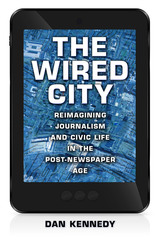 In The Wired City, Dan Kennedy tells the story of the New Haven Independent, a nonprofit community website in Connecticut that is at the leading edge of reinventing local journalism. Through close attention to city government, schools, and neighborhoods, and through an ongoing conversation with its readers, the Independent's small staff of journalists has created a promising model of how to provide members of the public with the information they need in a self-governing society.

Although the Independent is the principal subject of The Wired City, Kennedy examines a number of other online news projects as well, including nonprofit organizations such as Voiceof San Diego and the Connecticut Mirror and for-profit ventures such as the Batavian, Baristanet, and CT News Junkie. Where legacy media such as major city newspapers are cutting back on coverage, entrepreneurs are now moving in to fill at least some of the vacuum.

The Wired City includes the perspectives of journalists, activists, and civic leaders who are actively re-envisioning how journalism can be meaningful in a hyperconnected age of abundant news sources. Kennedy provides deeper context by analyzing the decline of the newspaper industry in recent years and, in the case of those sites choosing such a path, the uneasy relationship between nonprofit status and the First Amendment.

At a time of pessimism over the future of journalism, The Wired City offers hope. What Kennedy documents is not the death of journalism but rather the uncertain and sometimes painful early stages of rebirth.
AUTHOR BIOGRAPHY
Dan Kennedy is assistant professor of journalism at Northeastern University and has been a working journalist for nearly forty years. He currently contributes to the Huffington Post and the Nieman Journalism Lab. You can follow his Media Nation blog at http://dankennedy.net.Please see his interview on WBGH Greater Boston here http://www.wgbhnews.org/post/dan-kennedy-reimagines-journalism-wired-city
REVIEWS
-- Bill Densmore, director, The Media Giraffe Project


-- Dan Gillmor, author of Mediactive and We the Media: Grassroots Journalism by the People, for the People


-- Callie Crossley, WGBH radio and TV host, and producer of the documentary series Eyes on the Prize


-- Jay Rosen, blogger at PressThink and author of What Are Journalists For?